Lieutenant Colonel Ismail Cakmak was sent to Kartal Bridge on 15th July by the order of Regiment Commander Ömer Faruk Kose. He had come to the scene because he had received an order to intervene in a riot. When he saw that the regimental commander was talking about the revolution, he said ‘I will not obey the order’ and withdrew his troops.

Relatives of Lieutenant Colonel Ismail Cakmak, who was reported to have committed suicide by being found hanging from a sheet by his throat, in the stairwell in Silivri Prison after he was arrested on the grounds of a coup attempt, followed the issue.

The minutes of Lieutenant Colonel Ismail Cakmak’s statement to the police on the night he was taken into custody were shared with the press. The statements clearly showed that Cakmak stood against the coup plotters. Despite this, he was arrested and died suspiciously in Silivri.

It is stated in the report that Lieutenant Colonel Ismail Cakmak, who served as the Battalion Commander in the 23rd Motor Rifle Regiment, stated that he was sent to Kartal Bridge with his unit on the night of July 15th, by the order of the Regiment Commander Colonel Omer Faruk Köse, saying ‘there is a social incident’. the expression is as follows:
“When we came to Kartal Bridge, there was no citizen accumulation. We said to the citizens that there was an incident report. Then the Regimental Commander came with 4 captains and 1 major. He ordered me, ‘There is a revolution, guys. They will inform you. Let’s follow the instructions’. I said to the Regimental Commander. “I am not in this job. I do not accept such an order. I will not undertake this job,” and I gave the order to my troops to ‘return’. However, some of my units, which could not be transferred to the barracks due to the roadblock, went to Maltepe military lodgings and some to Tuzla. I returned to the barracks in a civilian vehicle. While we were going to the Kartal Bridge, we went with our shields and batons, not with our weapons. I certainly did not know about an event such as the revolution. I heard it for the first time when the Regimental Commander spoke to me and the citizens at the Kartal bridge. When his officers and citizens supported me, the Regimental Commander left. I never accept the accusations. They said ‘do it´. We came back when we learned their intentions. I want to be released. 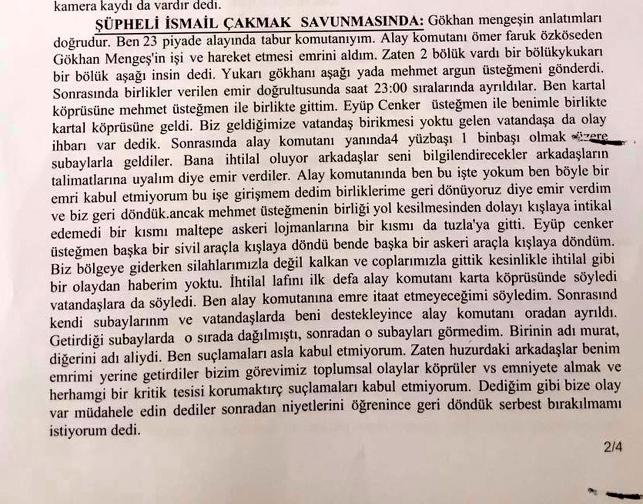